Do you dream of a restaurant opening in Perth with a dedicated vegan menu? Well dream no more, my friend. It’s here and it’s enough to tempt this sparkly vegan right out of her food comfort zone.

I’ve never been a Japanese food fan. I’ve only ever known sushi as cold, clammy rice rolls sold in sad little plastic boxes with plastic fish accessories. Whenever friends have tried to get me into a Japanese restaurant, I’ve managed to convince them that Thai or Vietnamese are much better options. I may have even bribed them with wine or discount vouchers – anything to avoid Japanese food.

Until now. Show me a stack of great reviews about the new place in town and tell me that they have a dedicated vegan menu, and I’ll be the first to round everyone up and convince them that I’ve always loved Japanese. I was just kidding all those other times. Really, I was. 😉

Check that baby out!! A whole page of vegan options. Thirteen choices, to be exact. Oh hello bliss. ♥ 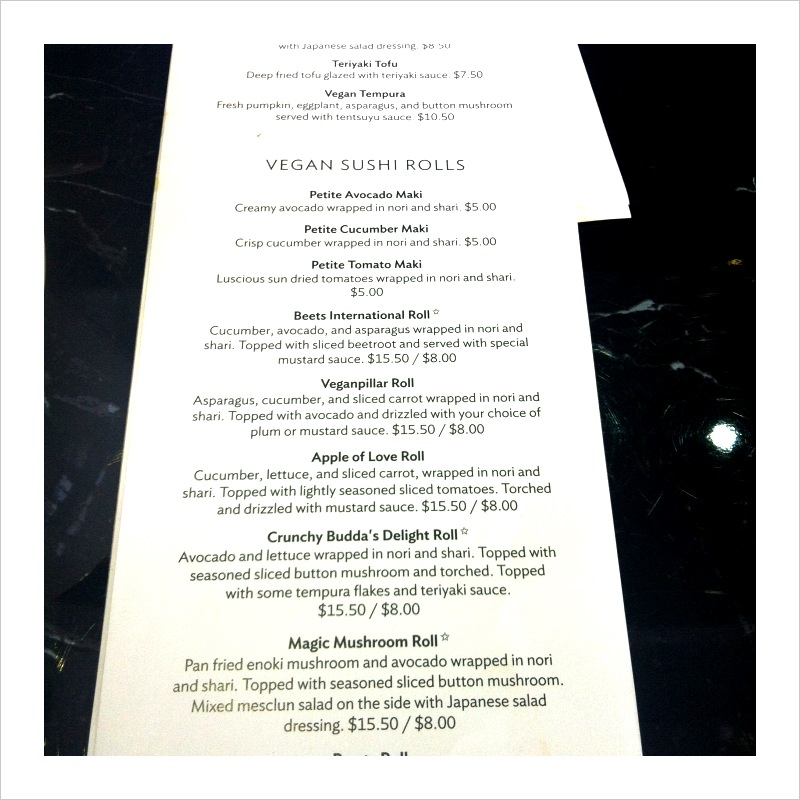 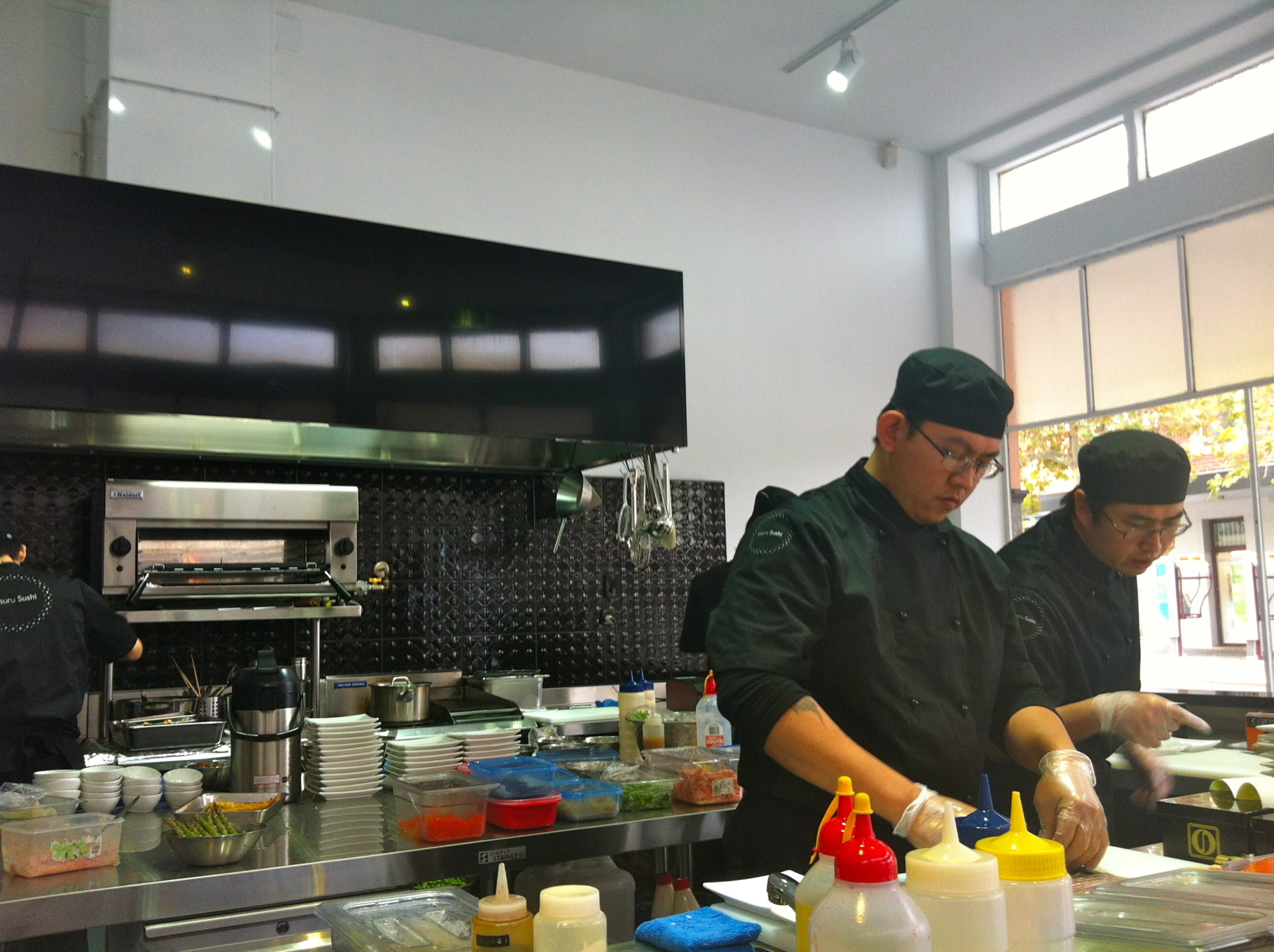 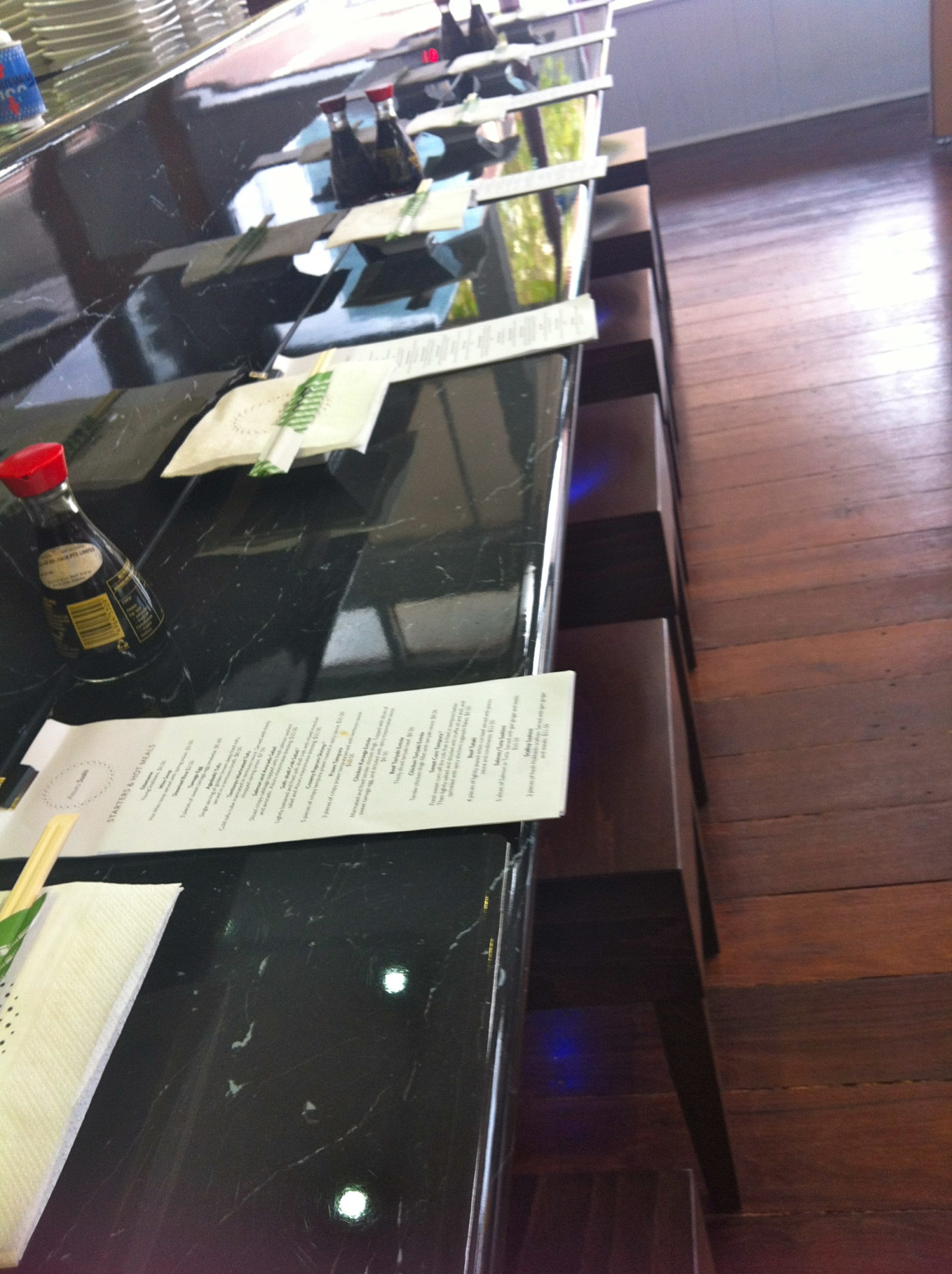 Aisuru doesn’t take reservations, so it pays to get in early. We were the first ones in the door at Noon on a Saturday (keen, much?) and had our pick of the conventional tables or seats at the sushi bar. We chose the sushi bar where all of the sushi is made fresh to order and we could watch the magic happen.

We started off with the Sweet Corn Tempura that has everyone raving. This dish is usually served drizzled with truffle oil and aioli but being vegan we requested it without the sauce, which is probably why we found it tasty but not as spectacular as the reviews I’ve read. I dare say that the sauce is the key ingredient, so next time we’ll stick to the Vegan Tempura (fresh pumpkin, eggplant, asparagus and button mushroom served with tentsuyu sauce, mmmmm). 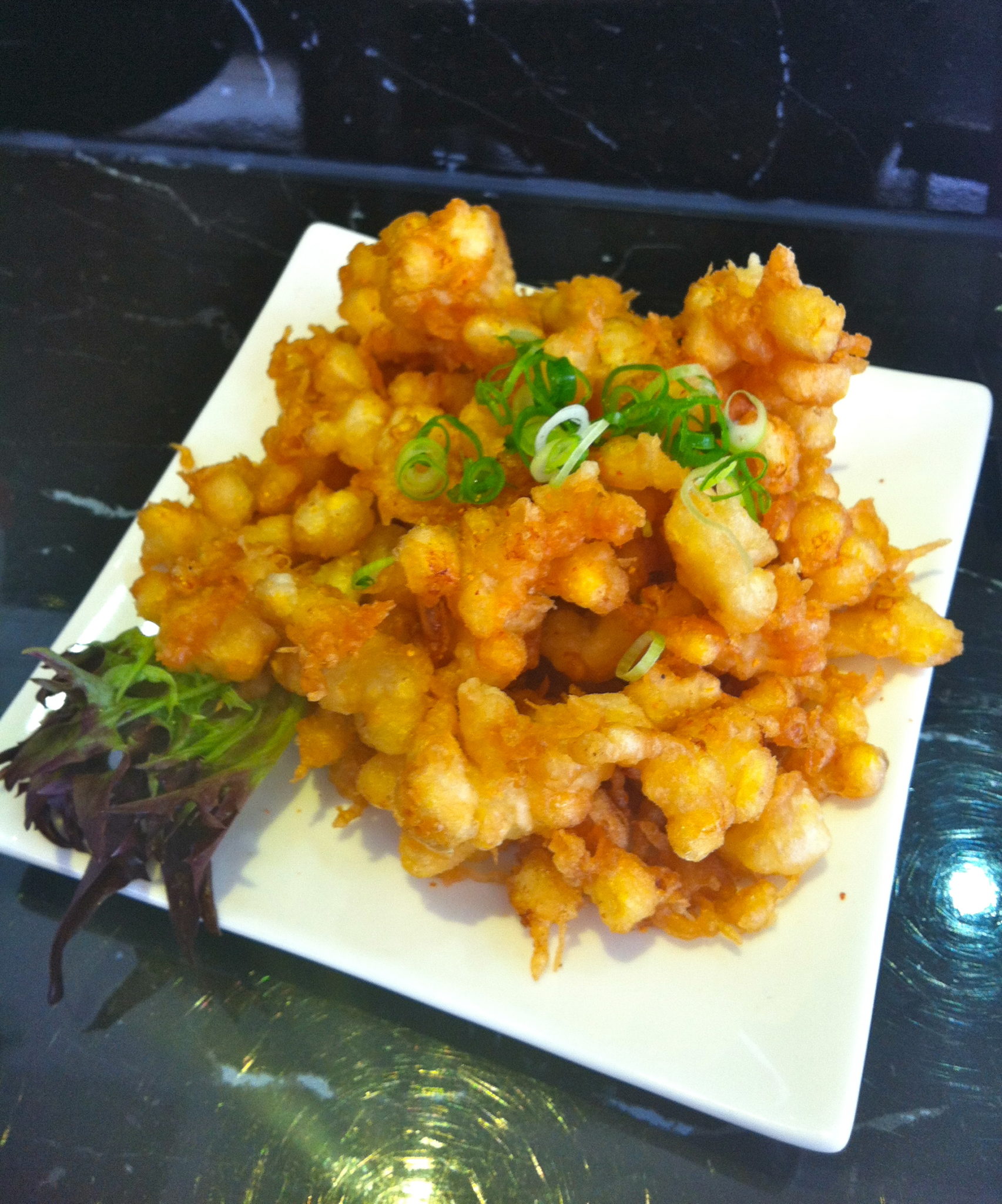 The Veganpillar Roll made its appearance next (asparagus, cucumber and carrot wrapped in nori and shari, topped with avocado and drizzled with plum sauce). This was by far my favourite. I had no idea that sushi could be like this. I absolutely adored the creamy avocado slices wrapped around the fresh, crunchy filling, and the plum sauce was sweet and sour heaven. 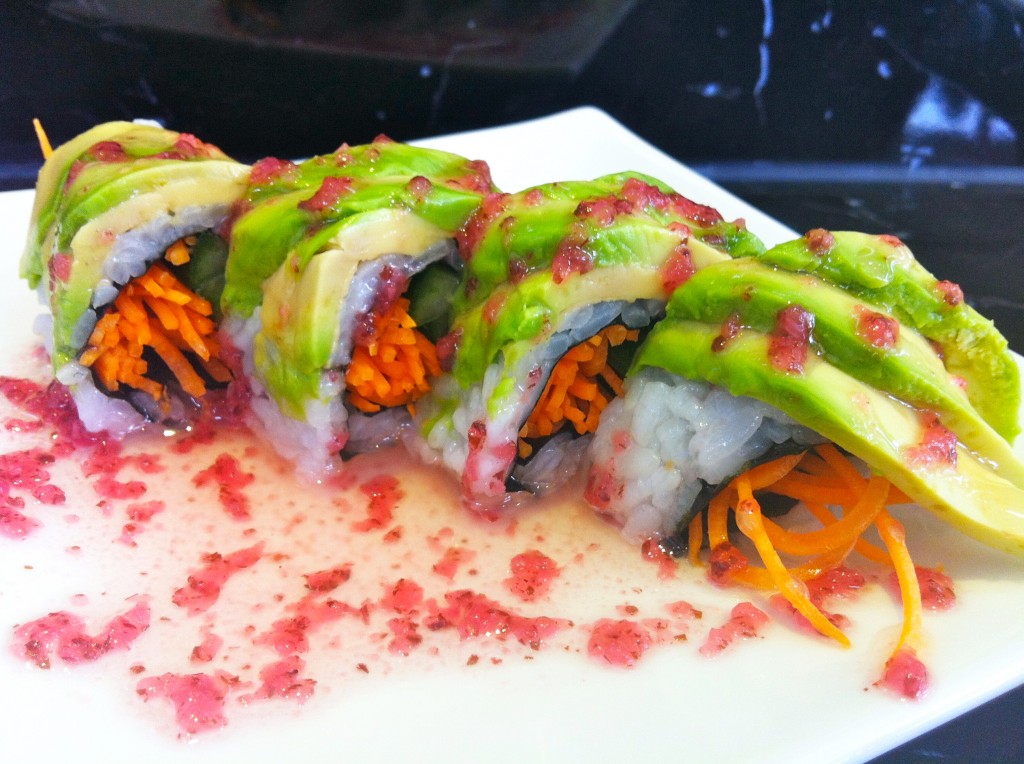 The Magic Mushroom Roll followed (pan fried enoki mushroom and avocado wrapped in nori and shari, topped with seasoned, sliced button mushroom, with a mesculun side salad and Japanese dressing). This sushi was also delicious, especially mixed with a little of the pickled salad dressing. 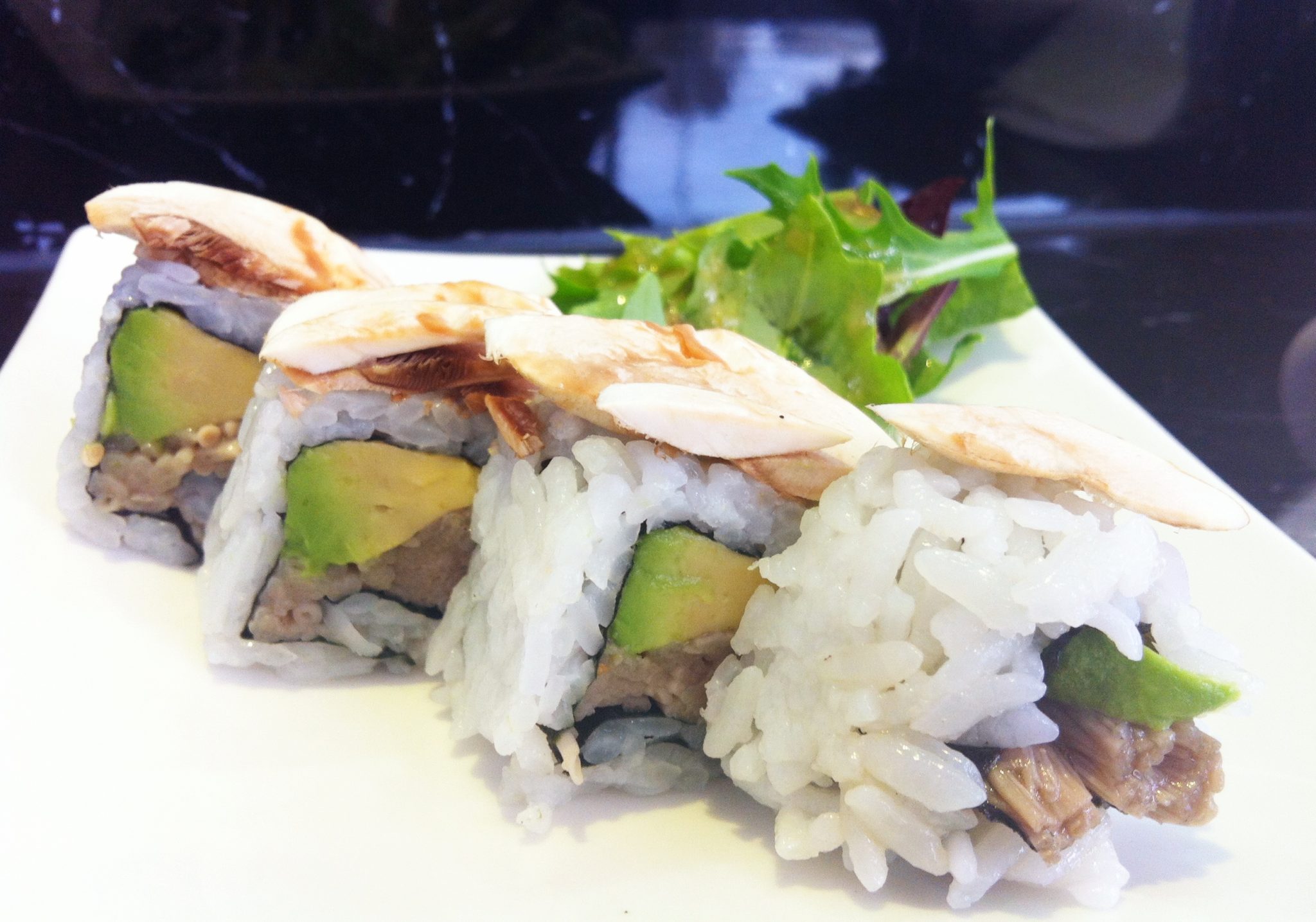 We ran out of time to try any more dishes (places to go – people to see!), but with so many delicious vegan options, friendly and attentive staff and fantastic service, it won’t be long before I convince my friends again that Japanese is a much better option than Thai or Vietnamese. 😉